Hope: The Killer of Giants 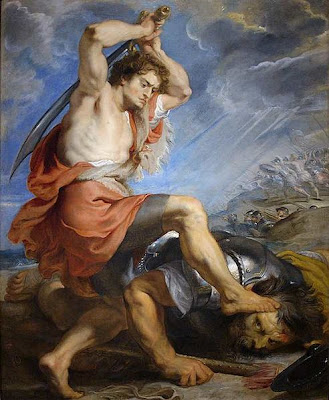 David Dispatches Goliath
by Flemish painter Peter Paul Rubens
(Wednesday of the of the Second Week in Ordinary Time-Year 2; This homily was given on 20 January, 2010 at the Chapel of The American College of the Immaculate Conception in Louvain, Belgium; See 1 Samuel 17:31-51)

What would have possibly possessed young David, in our first reading today, to believe that he could come up against such a lethal, malicious enemy as Goliath…and win? How could he have entered into combat with that mighty Philistine so completely sure of the victory?

Was it perhaps the recklessness of youth? His radical inexperience? Maybe he simply had not seen enough of the battlefield to know how very dire his situation was?

Was it perhaps supreme confidence in his own skill and ability? Remember, this is the same David who will quickly become a leader of men on the battlefield; he will soon become a brilliant tactician and general; a great warrior king. Perhaps he sensed that already within himself, beckoning him on to excellence and honor in battle.

Or was it raw courage? Was he simply the most courageous man in Israel? Was that what compelled him to act so boldly against the insolence of the Philistine?

I am sure that all of those things would have played some part in his battle with Goliath. Yet I would argue, above all else, that David acted the way he did because he was one who practiced the theological virtue of hope.

Now allow me to qualify what I mean by that. I do not mean that he really, really “hoped” he would not get squashed like a watermelon! It was more than mere wishful thinking that ushered David into battle. I mean that he practiced hope in the deepest and most theological sense of the word.

St. John of the Cross, in many of his works, writes about the theological virtues of faith, hope and love. He says that these are what enable us to be united to God. Hope, he goes on to describe, is the virtue that is most closely connected to the faculty of the soul we come to know as the memory.

That sounds a little strange, at first. Hope—the longing and desire deep within us which reaches out to grasp that which has not yet happened, that which lays in the future—this hope is connected to the memory we have of the things of our past.

Think about the people in your life that have been most faithful and loving, those gifts of God who have always been a source of comfort and strength. We look back and see that, time and again, they have been there for us and have never let us down. Suddenly we find ourselves in a difficult situation and we hold on unwaveringly to the belief that they will continue to remain with us and be there for us even now. That is the theological virtue of hope.

Of course, St. John of the Cross would insist that all our faculties—the memory, as well as the intellect and the will—are in constant need of purification. We must purge our memories, and allow God to purify them, of all that is not from Him, letting go of all that gratifies the self without God. Then we will have a pure hope which longs for and desires not many good things without God, but God first, and then all things in union with Him. We hope for the things that matter most because we recall that all the best things we have ever encountered come to us from God and the greatest of all these things is God Himself. That is a more complete picture of what St. John of the Cross would describe as hope.

David, in our first reading from 1 Samuel, practices that virtue beautifully. He stands before the king and tells him “Let your majesty not lose courage. I am at your service to go and fight this Philistine” (1 Samuel 17:32).
King Saul, for his part, is incredulous:

“You cannot go up against this Philistine and fight with him,” he tells David, “for you are only a youth, and he has been a warrior from his youth” (1 Samuel 17:33).

But David explains what he is convinced will happen by looking back to all that has happened in the past. He recalls how he would lead the flock of God and tend the sheep, and how the lambs were sometimes attacked by lions or bears. He defended them and always came out victorious.

But David is careful to see those moments of the past with his memory purified. He does not say, “I had the strength and skill to defeat those beasts, and so watch me wipe out this Philistine!” No, he does not insist on his expertise with a sling and a stone, even though that is ultimately what he will use to defeat the enemy. Instead David looks back and recalls things as they really were and insists that the victory is one that belongs to God: “The Lord,” he says. That is who will make all the difference:

The Lord, who delivered me from the claws of the lion and the bear, will also keep me safe from the clutches of this Philistine.
—1 Samuel 17:37

It is not David’s strength or his ability which will make the decisive difference here, but the Lord. Goliath may have the experience and power to crush young David but he is no match for almighty God! He discovers that quickly. David’s undying hope is the killer of giants, and the one weapon that no enemy can withstand.

Where do we most need to grow in the theological virtue of hope in our own lives right now? We, who have so many enemies in the Christian life, so many distractions and setbacks that keep us from growing in Christ and living for His Kingdom, are called to have a mighty hope which has the power to anchor our souls in God (see Hebrews 6:19).

How is God challenging us to purify our memories and to recall more deeply all the moments of His faithfulness and love toward us? We who have been forgiven so often by God, who have always been granted the grace and help we needed, who are constantly given light and peace when we need it most, whenever times are dark or difficult; we can trust most assuredly that the same God will be there for us now and always in the days to come.

May we learn well from David that—whatever insurmountable obstacles are before us, whatever Goliaths we encounter—hope is the killer of giants and the surest path to the promises that God offers to us today and always.
Posted by Rev. Christopher M. Mahar at 4:58 PM