Prophets: Ezekiel, Christ and You! 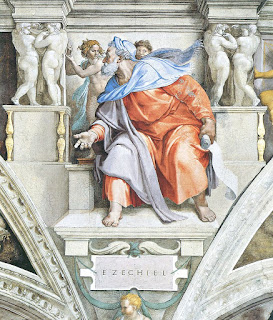 We catch a glimpse this weekend of the awesome mission and ministry of the prophet.  In our first reading we hear about the call and ministry of Ezekiel.  Along with Isaiah, Jeremiah and Daniel, Ezekiel is one of the four Major Prophets of the Old Testament.

Likewise, in the Gospel of St. Mark this weekend, Christ identifies Himself specifically as a prophet:

A prophet is not without honor except in his native place and among his own kin and in his own house.
—Mark 6:4

The word prophet, in Hebrew, is nabi, and it comes from the root word meaning “to bubble forth, as from a fountain.”  It is quite a striking image for us to reflect on; we can imagine a large, ornate fountain, bubbling over with its fresh, clear water.  The image is also one that can be quite instructive.

There are two things immediately obvious about a fountain.  The first is that it does not generate water of itself.  Fountains are made of marble, stone or concrete.  The water comes to a fountain from the outside.  Secondly, the water from a fountain is constantly bubbling forth.  Day and night the waters cascade over the marble in a consistent and refreshing flow.  We find both of these elements in the Book of the Prophet Ezekiel.

Ezekiel tells us in our reading for this weekend:

As the Lord spoke to me, the spirit entered into me and set me on my feet, and I heard the one who was speaking say to me: Son of man, I am sending you to the Israelites, rebels who have rebelled against me . . . you shall say to them: Thus says the Lord God!
—Ezekiel 2:2-4

The Spirit of God entered Ezekiel the prophet and God told him what to say; the message he was to proclaim was not his own.  He was not offering his opinion to the people of Israel.  His calling and prophetic message were from God, and what bubbled forth from Ezekiel was the infinitely powerful word of the Lord.

Secondly, Ezekiel’s proclamation of that word of God was constant.

The beginning of the Book of the Prophet Ezekiel is very much a message of doom and gloom.  He cries out against a people who have forsaken the Lord their God, a truly “rebellious house.”  In fact, by the time Ezekiel begins to prophesy the nation has already begun its exile into Babylon.  Ezekiel is the only major prophet to carry out his ministry on foreign soil.  But he warns the people that if they persist in their sins and violate the laws of God, then Jerusalem itself will fall and the Temple will be destroyed.  Such a possibility was unthinkable for most of the people, despite the fact that the exile that was already taking place.

Sadly, the people did not believe the words of the prophet Ezekiel.  In the year 586 BC the City of Jerusalem fell and the Temple was laid waste.  But then something began to change in the message of the prophet.  Ezekiel’s proclamation changed from one of doom and gloom to a message of hope, healing and restoration.

It is as if Ezekiel the prophet were saying, “You have failed to live out the covenant that God made with you, and you have forgotten God. . . But He has not forgotten you!”  Although all that he had foretold had come to pass—the fall of Jerusalem and the temple left in ruins—the message of the prophet continues to bubble forth, even in the land of exile, announcing the perennial and inexorable word of God.

God, towards the end of the book, announces through the prophet:

I will take you from the nations, and gather you from all the countries, and bring you into your own land.  I will sprinkle clean water upon you, and you shall be clean from all your uncleanness, and from all your idols I will cleanse you.  A new heart I will give you, and a new spirit I will put within you; and I will take out of your flesh the heart of stone and give you a heart of flesh.
—Ezekiel 36:24-26

In the next chapter we hear about the valley of dry bones, in which Ezekiel receives a vision of God restoring Israel and breathing new life into the nation once again (Ezekiel 37:1-14).  Ezekiel will likewise relate the vision of the rebuilding of the Temple, where a river too deep and expansive to cross will flow from the sanctuary and bring healing and new life to everything in its path (Ezekiel 47:1-12).

Constantly was the message of God bubbling forth from the prophet to bring the people the word of God that alone gives life.

In the Gospel of St. Mark this weekend, Jesus Christ is announcing that same saving message.  The response of the people is one of both astonishment (Mark 6:2) and, sadly, lack of faith (Mark 6:6).  Nonetheless, in all of the Gospel accounts, Jesus Christ is constantly proclaiming the saving message of God.  Not unlike the prophetic message of Ezekiel, that message is one of repentance and a warning that failure to heed the word of God will end in destruction, but Jesus' message is also predominately focused on healing, hope and the forgiveness that will lead to eternal life.

Why is the prophetic mission of Ezekiel and, ultimately, of Jesus Christ, so vitally important for us as Christians?  It is essential for us because, as men and women baptized into Christ, we share in that prophetic mission and ministry.  On the day that we were baptized, the priest or deacon prayed:

“The God of power and Father of our Lord Jesus Christ
has freed you from sin, given you a new birth
by water and the Holy Spirit,
and welcomed you into his holy people.
He now anoints you with the chrism of salvation.
As Christ was anointed Priest, Prophet, and King,
so may you live always as a member of his body,
sharing everlasting life.”
—Rite of Baptism

We share in that three-fold office of Jesus Christ: priest, prophet and king:

§  As Jesus Christ offered Himself in sacrifice on the altar of the cross for the salvation of the world, we, too, share in that priesthood by offering ourselves freely and generously to God as a “living sacrifice” (Romans 12:1-2).

§  Jesus Christ rules over the nations as the King of Kings and Lord of Lords, but He leaves us an example of how to do that by getting down on His hands and knees and washing the disciples’ feet; we rule with Christ and share in his reign when we serve our brothers and sisters in self-giving love.

§  But, pertinent to this weekend’s readings, we share also in the prophetic ministry of Jesus Christ by virtue of our baptism and the anointing we have received from the Holy Spirit.

How desperately the world we live in needs this prophetic ministry from the baptized people of God!  We are living in times unprecedented in which marriage and the family are in crisis like never before since the foundation of the Christian Church.  Our Holy Father Pope Francis has called an Extraordinary Synod of Bishops on the Family (2014) and now an Ordinary Synod of Bishops on the Family (2015) specifically to address this very crisis.   We live in a world where the lives of the unborn and the elderly are vulnerable and, tragically, expendable.

Beyond these critical areas of social and communal life, there are countless men and women who work hard each and every day, trying to build a family and to make a difference in this world, and who come to the end of the day without fully understanding what the meaning of life really is.  They do not know or understand the purpose for living or the reason why they were created.

The world around us has forgotten this meaning and this purpose.  You and I, as prophets sharing in the three-fold office of Jesus Christ, are called to remind them.  We are called, like Ezekiel and like Jesus in the synagogue, to bubble forth the message and the word of God, like a fountain.  We receive that word lovingly and willingly, and we strive to constantly make the message of the Gospel known in the world around us by the way we love, by the way we live and by the words that we use each day.

In conclusion, we can take solace from the Prophet Ezekiel this weekend, who reminds us that the results and the effects of our work and lives as Christians are entirely dependent upon God.  The Lord asks us simply to be faithful.  As He sent out Ezekiel to announce His message—whether or not the people would listen—all that he required of the prophet was fidelity; so it is with us.  Like Ezekiel, may we also be strengthened in the words of the Lord, that “whether they heed or resist . . . they shall know that a prophet has been among them” (Ezekiel 2:5).
Posted by Rev. Christopher M. Mahar at 4:47 PM