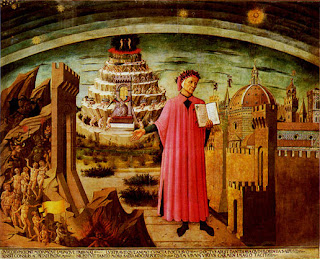 Midway on our life's journey, I found myself
In dark woods, the right road lost.

These are the opening lines to one of the greatest works of Italian literature ever composed, Dante Alighieri's epic poem The Divine Comedy.  In a certain sense The Divine Comedy is an autobiographical poem.  Written after his exile from Florence where he had been immersed in cultural and political life, it begins in media res with Dante's “mid-life crisis” and the sense of spiritual darkness that would have confronted him.

Nonetheless, The Divine Comedy could also be a biographical poem describing any one of us.  We have all, at one time or another, experienced what it is like to be spiritually "in the dark."  Through not truly loving God as we ought or not loving those around us; in not keeping the commandments or fulfilling the responsibilities of our state in life; in those times in our lives when perhaps we have personally fallen from grace; we know what Dante Alighieri means when he speaks of being “In dark woods, the right road lost.”

For Dante this moment of darkness is suddenly pierced by a vision of light as he looks off into the distance and sees the mountain of God shining in the sun.  It is a glimpse of heaven, divine light, which reignites the hope deep within his heart and reorients his journey to nothing less than the dwelling place of God.

In our second reading for this weekend the author of the Letter to the Hebrews describes that same mountain for us.  He writes:

You have approached Mount Zion and the city of the living God, the heavenly Jerusalem, and countless angels in festal gathering, and the assembly of the firstborn enrolled in heaven, and God the judge of all, and the spirits of the just made perfect, and Jesus, the mediator of a new covenant…
—Hebrews 12: 22-24

Our hearts, too, are aflame with hope and anticipation as that heavenly vision is set before us.  This is our destination, the end for which we have been created!  Set your heart on that place, the author of the Letter to the Hebrews seems to communicate to us.

But back to our story… Dante, upon approaching that mountain, begins to make his ascent only to be confronted by three ferocious beasts that block his passage: the leopard, the lion and the she-wolf.    These represent three of the great enemies of the spiritual life:

The leopard—sleek and attractive, beautiful to behold but potentially deadly—represents sensuality.  She is a formidable foe for Dante.

Next he encounters the lion, head held high, roaring at Dante as he approaches.  He represents pride, arrogance and self-importance.  As a very gifted artist and a politically powerful man in his own right, this particular vice would no doubt have been a challenge for the Florentine poet.

Finally Dante is confronted by the she-wolf, which is a symbol for avarice or greed, that ravenous and insatiable hunger for more and more possessions, the accumulation of riches and material goods that can never truly satisfy the soul.

Unable to withstand these powerful enemies Dante is forced back down the mountain in discouragement as he realizes he does not possess the strength to ascend to the dwelling place of God.  His hope has been shattered.  But it is precisely here, in his discouragement and disappointment, that he will meet Virgil, the great poet from the ancient world, who will show him still another way:

“A different path from this one would be best
For you to find your way from this feral place.”

And so the poet Virgil leads Dante not upward immediately to the mountaintop but instead downward, all the way down into the depths of the Inferno. To reach the top of God’s mountain Dante will first have to humble himself and enter the lowest place of all.  It is here in the abyss of Hell itself that Dante will come face to face with the brutal reality of sin and its consequences.  It is a sight that will make him sick to his stomach for he will come to understand that this is the place which he has deserved; here are some of the same sins that have taken him off the path of God so many times.  But that is not to be Dante’s fate (nor ours, please God).

Dante is drawn out of that infernal abode and into the Purgatorio, the place of great purgation where souls who have likewise been marred by sin are nonetheless being purified and made ready for eternal bliss.  These did not hold and cling to sin as their final aspiration but instead desired God and longed for Him.

Having been purified of all selfishness and attachments Dante will finally enter into the Paradiso, our heavenly homeland, where he will now share forever in the beatific vision.  He has made it to the top of that great mountain, but to get there he first needed to walk the path of humility.  To reach the heights of heaven he needed to begin by taking the lowest place of all.

In our Gospel for this weekend Jesus Christ invites us, as well, to walk that path of humility and to take the lowest place.  He says:

When you are invited by someone to a wedding banquet…Now whenever Christ uses the phrase “wedding banquet,” He is speaking about heaven and eternal life.  In the Book of Revelation we hear of the great "wedding banquet" or "marriage supper" of the Lamb.  Jesus Christ is that Lamb of God who gives His own body and blood as food for His bride, the Church.  He will feed us with Himself and we will be united to Him forever.   This is the wedding banquet that He is referring to in the Gospel of St. Luke this weekend.  This parable about taking the lowest place and not seeking positions of honor is about so much more than table manors.  This is not some general lesson on the virtue of humility.  Jesus Christ is taking about nothing less than our eternal salvation.

Are we responding to that invitation with a humble and contrite heart (see Psalm 51:17, Daniel 15:16)?  Are we walking the path of humility and able to acknowledge that we would not have a seat at the table at all if not for God’s mercy and forgiveness in our lives?  Perhaps a closer examination of our own lives based upon Dante’s three great enemies could serve as our guide in this coming week.

Sensuality.  How are we responding to this challenge, particularly in an age where the sensual pleasures of life are held in such high esteem?  For the last week and a half we have heard so very much about Miley Cyrus.  It seems that every TV and radio talk show and entertainment outlet has something to say about her provocative performance on the Video Music Awards.  Yet sadly the day will come very soon when the world around us will forget all about Miley Cyrus.  Sic transit gloria mundi.

But one thing is certain, the world has shown no sign whatsoever of forgetting its focus on sensuality.  The images on television and in the movies are increasing daily, not to mention what is taking place on the Internet.  Media can be a tremendous gift and a medium through which the Gospel message and so many good things can be transmitted.   Nonetheless the dramatic increase of pornography on the Internet, year in and year out, has destroyed the spiritual lives of countless individuals and ruined so many families.  How are we responding to this crisis in our time?  Do we even acknowledge that it is a crisis?  Are we praying for those who have become addicted to these images and are we seeking purity in our own personal lives each day?

Pride.  How often do we find ourselves face to face with this ferocious beast?  Pride is one of the seven deadly sins, and perhaps one of the most difficult to distinguish in a culture that places such a high degree of emphasis on the self.  How many times have we demanded “first place” in our friendships, our relationships and in the workplace?  Jesus Christ in the Gospel this weekend tells us NOT to do that!  He says that we should “go and take the lowest place.”  The great sage Ben Sirach, in our First Reading for this weekend says, “Humble yourself the more, the greater you are, and you will find favor with God” (Sirach 3:18).  Are we walking in that path of humility and seeking the favor of God?

Greed.  How are we responding to that ravenous and insatiable beast that would have eventually been the downfall of our Florentine friend Dante?    Do we find ourselves consumed by consumerism or possessed by our own possessions?  There is nothing wrong with having material possessions and wealth, but if we find ourselves constantly hungry for more then we risk losing sight of the path that God has chosen for us, the way that ends not here, but leads instead through this world to eternal life with Him.

Like Dante we are called to take account of the struggles we face and the failures we encounter on our way home to God.  Are we able this week to do that with humility and an openness to the mercy and grace necessary to draw ever closer to the living God?  If so, then perhaps we will hear the voice of Christ in the Gospel speaking to us: My friend, move up to a higher position (Luke 14:10).  My friend, my Beloved, move closer to me even now… and in eternal life.
Posted by Rev. Christopher M. Mahar at 7:50 PM