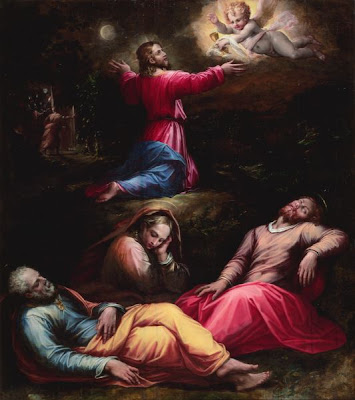 (Tuesday of the Twenty-Ninth Week in Ordinary Time; This homily was given on 19 October, 2010 at the Chapel of The American College of the Immaculate Conception in Louvain, Belgium; See Ephesians 2:12-22 and Luke 12:35-38)


Christ in our Gospel this morning instructs and admonishes his disciples to be vigilant; to be watchful and ready; to be prepared to receive Him when He comes to them (Luke 12:35-38). And although we are not given a list by St. Luke of the disciples who were present at that moment, we can certainly guess the names of some. St. Peter, for instance, most likely would have been there; Saints James and John; perhaps the rest of the Twelve. These were the men who were with our Lord day and night throughout His public ministry.

Some of these same men, St. Luke relates just a few chapters later, were taken aside by Him and given the very same instruction that we hear today: be vigilant; watch; pray (Luke 22:39-46). Yet despite being warned twice to be prepared for Him and ready, they failed. They were not vigilant; they flagged in their fidelity to our Lord. They not only fell asleep when Christ was counting on them to be awake and alert but they also, all of them, abandoned Him in His time of trial.

But by the grace of God they were given another chance to watch and wait for Him. St. Peter was given the opportunity to strengthen those who, like Him, had failed (Luke 22:31-32). Those very same disciples began to grow, in earnest, in their vigilance and preparedness for the presence of the living God. By the end of their lives they were more than ready, more than vigilant and prepared to meet their divine Bridegroom when He came for them.

The words of Christ in the Gospel this morning are poignant and fitting in their application to those disciples (and to us):

And should he come in the second or third watch and find them prepared in this way, blessed are those servants.
—Luke: 12:38

The second or third watch…

The Jewish people observed three watches of the night. The first watch was in the early evening, the second watch occurred around midnight, and the third was at dawn.

The disciples missed Him in the second watch in the Garden of Gethsemane. They were asleep and did not heed our Lord’s command. But in the third watch, at the dawn, when the light of Christ came for them—not at the end of the evening bit at the end of their lives—they were ready. They had grown in their vigilance, in their watchful attention to the presence of God, something that they had become more and more attuned to as they strived to serve Him faithfully. Yes, they failed, but in the mercy of God they learned how to grow and persevere in waiting and watching for God.

So it is with us. Often in the very places where we have failed to be vigilant, in the places that we have not been mindful of the presence of God, He calls us to an even greater vigilance and a more intense watchfulness so that, when He comes again, we will not miss Him. Our lives are often lived between those two watches—failure and fidelity—a dynamic process of growth in which we are being prepared to enter eternal life with Him.

St. Paul alludes to that dynamic process in our first reading this morning. He talks about our collective identity as a Temple of the living God, but he does not say that we are a building which is already fully completed. No. He says, “Through [Christ] the whole structure is held together and grows into a temple sacred in the Lord; in him you also are being built together into a dwelling place of God in the Spirit” (Ephesians 2:21-22).

The foundation of that building is already in place. St. Paul mentions the Apostles and prophets which make up that foundation. Paul himself would become a part of it; St. Isaac Jogues, St. John de Brebeuf and their companions whose feast we celebrate today, are a part of that foundation. It is rock solid and cannot be shaken. Christ Himself, as the capstone, is already in place and will hold this temple together.

But for the rest of us, we are being built into that dwelling place; we are growing into that temple of the living God, and that can be a mysterious, challenging and even painful process. It is often the case that God must shift and adjust each stone, and perhaps even turn some upside down so that they will fit just where He wants them to. At other times He may need to hammer and chisel out parts of the stone, making it smoother or more perfectly shaped for His own desires and purposes. It is not a pleasant process; yet we trust in the God who lovingly knows just how to form us and mold us in Christ.

Wherever we are today we ask for the same grace that Saints Peter, James and John received; the grace that enabled St. Paul to grow in his vigilance and eagerness to follow Christ and serve Him well. May we also be built up in Christ, made more and more vigilant, more and more fit for that “dwelling place of God in the Spirit,” so that when our divine Bridegroom comes to us at the end of our lives we may be ready to walk into eternal life with Him.
Posted by Rev. Christopher M. Mahar at 4:11 AM