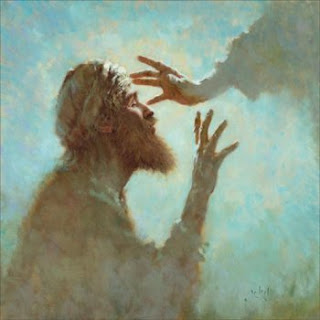 The Healing of Bartimaeus

Every high priest is taken from among men and made their representative before God, to offer gifts and sacrifices for sins.

These words that we listen to in our second reading this weekend, from the Letter to the Hebrews, refer to the priesthood as the people of Israel knew it in the Old Covenant, under Moses and Aaron.  But those words are equally applicable in reference to the priesthood we are all familiar with in the New Covenant.  One of the reasons why the Church gives us that passage from Sacred Scripture in the liturgy this weekend is because it reveals essential truths about the priesthood of Jesus Christ.

Every Catholic priest is taken from among the people and made their representative before God, to offer gifts and sacrifices for sins.

No one takes this upon himself.  No one.  Only when called by God.

People will often ask me, “How did you know that God was calling you to the priesthood?”  On one level that is a very difficult question to answer; anyone’s personal relationship with God is something that is deeply personal and mysterious.  But on another level it is something that can be explained and put into a rather reasonable response.

I was in my mid-twenties and had been, for some time, considering the vocation of marriage.  It was a time in my life that I was really beginning to grow in my Catholic faith; I was actively praying for and seeking marriage and family life.   I really desired to know what God wanted for my life.  I was open.  Wide open.  I even considered the possibility of being a missionary.

Suddenly, at around that same time in my life, I felt a powerful and rather fearful/awe-filled sense that God was asking me to do something else.  I felt that He was asking me to be a Catholic priest.  I did not actually hear God speaking to me out loud, nor did I see a vision of God that communicated these things to me.  But I felt the presence of God in my heart drawing me to this one, constant and compelling thought.

No one takes this upon himself . . . Only when called by God.

God called me to the priesthood, and my response to that call is my vocation.   I am a Roman Catholic priest because God called me.

The word “vocation” comes from the Latin word “vocare,” which means, “to call.”  Every vocation in the Church begins with a call from God.    And certainly you have heard, many times over, that there is a vocations crisis in the Church.  As rector of the college seminary here in Providence I would not argue against that at all.  There are many more priests retiring each year than there are men entering the seminary; the number of those completing their service in the Church is greater than the number of those being ordained.  It is definitely a crisis in the true sense of that word.

But I would suggest strongly this weekend that there is not a crisis in vocations to the priesthood only.  Not at all.

In fact, we know statistically that there are fewer and fewer young men and young women approaching the altar of God for the Sacrament of Matrimony in the Church today.  How disturbing, based upon what we know of the supernatural grace of God present in the life of a married couple receiving this sacrament, the divine assistance to help them in their new life together.   We know that this sacrament, this vocation, this call from God, has the potential to bear tremendous fruit in the lives of that newly married couple and in the lives of those around them.  But more and more couples today are not responding to that call and the grace of that sacrament.

We know, statistically, that fewer women and fewer men are responding to the call of God—vocare—to religious life and consecrated life.  There are not nearly as many religious sisters in the Church as there once was, and even fewer religious brothers.

There is not only a crisis of priestly vocations in the Church.  There is a crisis in vocations, period.

I would even say that there is a crisis within vocations today in the Church, a crisis involving those who have already said, “yes” to God: in the priesthood, in religious life and in marriage.  Why would I say that?  Because many of the Churches that used to be full are now empty!  The vitality and fruitfulness that God calls for within each and every vocation is not taking place.

People are choosing to stay home on weekends or attend other community events instead of coming here to receive the Blessed Sacrament of the Eucharist, to be strengthened in their vocation and in their apostolic life (many, I would suggest, are not even aware that they are called to an apostolic life).  There is a vocations crisis within the Church today because outside of the Church there are thousands and thousands of souls who have never heard the message of the Gospel!   There are people all around us, people that we know and love, who so often experience shame, guilt and confusion because they do not truly know God.  So many people get dragged down by sins that wreak havoc in their lives, not knowing that they are infinitely loved by God and that He longs to grant them forgiveness and mercy in Jesus Christ.

We are the ones God has called and commissioned to bring that awesome message to the world around us (see Matthew 28:19-20), with our words and in the way that we live our lives.   Are we listening to that call?

The Gospel of Mark that we listen to this weekend provides a beautiful and poignant example of how God calls us to know Him, and how we are invited to respond to that life-long and life-giving encounter.

St. Mark tells us that Bartimaeus, a blind man, “sat by the roadside begging” (Mark 10:46).  He was a truly helpless man, unable to see all that he wanted to see and unable to do everything he wanted to do.  He was a man in the dark, and he knew that there was not a man or a woman alive that could ever change that.  Only the Messiah could bring him the healing that he longed for, only the son of David.

Every vocation, every call from God, begins with a humble recognition that we are utterly helpless and needy before God.  How helpless?  How needy?  We are so desperate before God and so needy that the Son of God had to suffer and die on the cross to save us.  Now that is desperate!  The mercy and love of God that we hunger and thirst for comes to us from that total self-offering of Jesus Christ who came “to give his life as a ransom for many” (Mark 10:45).  Do we want that?  Do we really, really need it?

Every true and fruitful vocation in the Church has to begin with this humble acknowledgment and a cry for the help that only God can give.  “Jesus, son of David, have pity on me” (Mark 10:48).

The moment Bartimaeus begins to cry out, Jesus hears him.  Remarkably, though, the Lord does not Himself go to the blind Bartimaeus.  He does not Himself immediately call that helpless, needy man.  No, he turns to the disciples and says to them, “Call him” (Mark 10:49).  “You,” Jesus is saying, “You, who were content to keep him silent.  You call him!”  One of the reasons for a lack of priestly vocations today is certainly because many people in the Church have failed to identify and encourage the young men God is calling to this fruitful and vital vocation.  Such was not the case in the Gospel this weekend.

The response of Bartimaeus when he hears that Christ is calling him is striking.  St. Mark tells us:

How odd, that “he threw aside his cloak.”  Why did he do that?  The Fathers of the Church tell us that he is casting aside the old self, his old way of understanding things.   He is making a clean break with the past and going to Jesus Christ to receive new life.

Obviously, when we encounter Christ and receive that call to follow Him, we must get rid of all the sins that keep us from growing in holiness and the fullness of life in Christ.  If there is any unrepentant sin in our lives, obviously it has to go.  If there is an addiction to pornography (rampant in our culture today), to alcohol, drugs, or even to another person; if there is any sinful habit, destructive relationship, anything at all that blocks our vocation in Christ, then it has to be cast aside.

But by all means that cloak does not represent only bad and sinful things.  We are called not just to let go of bad things, but also to sacrifice even good things in order to follow Christ more closely.

St. Jose Maria Escrivá comments on this scene, where Bartimaeus throws aside his cloak and goes to Christ, and says it is represents the sacrifice we are called to make as disciples of Jesus Christ.

Escrivá describes a time during the Spanish Civil War when he had come upon a battlefield just after a major campaign had been fought.  The entire field was literally covered in army coats that the soldiers had abandoned—thrown aside, like Bartimaeus—as the battle raged on.  There were also water bottles; sacks filled with personal items like pictures or letters from loved ones.  All of these items had been left behind by the victors, those who had won the fight!  They were willing to sacrifice even those good things in order to win the victory that day.  How much more willing should we be to make sacrifices in our lives to be victorious and fruitful in the vocation we receive from Jesus Christ?

Finally, we can learn a great deal from that dialogue between Jesus and Bartimaeus that begins with our Lord's question:

It should seem rather obvious what Bartimeaus wants, but Jesus, nonetheless, wants Bartimaeus to want it, even more.  “Master, I want to see,” (Mark 10:51) he replies.  And as he receives his sight, we are told, he immediately followed Jesus on the way.  He became a disciple of Jesus Christ.

How often do we enter into that dialogue with God called prayer?  How often do we speak to God from the depths of our hearts and ask him to heal our spiritual blindness, to open our eyes to all the needs around us and to those places where we need to see a change and transformation in our lives and in our world?

Today, we ask God for the grace to recognize how desperately we need Jesus Christ, and how desperately He desires to give His life for the salvation of the world.  We cry out, “Jesus, son of David, have pity on me” knowing that He is already calling out—vocare—to us.  We ask Him to open our eyes to the vocation He is calling us to, or to open our hearts within the vocation that we have already received, that we may truly be faithful and fruitful in making Jesus Christ known and loved in the world we live in.
Posted by Rev. Christopher M. Mahar at 8:00 PM