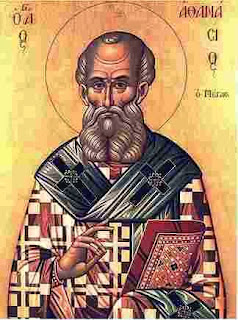 The scene we hear about in the Acts of the Apostles this morning is a terrifying one for St. Paul and St. Barnabas.  It might seem laughable to us, that after healing the crippled man at Lystra the crowds mistook Paul and Barnabas for the gods Zeus and Hermes and wanted to offer sacrifice to them!  The reaction of these Apostles, however, is no laughing matter.  Seized with anxiety, they immediately tore their garments and shouted:

It is a fearful and shameful thing for a man to consider himself a god, or allow others to think so.  They spared no effort to make it perfectly clear that they were men, and not gods.  They were Paul and Barnabas, and not Hermes and Zeus!

Which brings me to a famous expression that I would like to offer this morning; see if you can guess who said it.  The statement, referring to the incarnation, the coming of God as man, is this:

“God became man so that we could become God.”

Now who would dare to say something like that?  Was it Arius?  Pelagius?  Nestorius?  Which one of the great heretics of old said those words?

In fact, it was none of them.  The person who famously offered that expression is not a heretic at all, but a saint.

St. Athanasius, whose Feast Day we just celebrated last Saturday, May 2, said that “God made himself a man in order that man might be able to become God.”  It is the Christian doctrine of deification, and Cristoph Cardinal Shönborn explains how that formulation is found in all of the great Church Fathers, in the Middle Ages and right on into the Modern period.  It is only in contemporary times that many theologians have abandoned that doctrine in favor of a mere “humanization.”

But the truth of Christianity, referred to by the Church Fathers as the “wonderful exchange,” is that God became man so that we could be “deified.”  One of the early Church councils, the Council of Chalcedon, championed that truth by explaining how both the human nature of Christ and His divine nature exist together in perfect harmony, without the loss or confusion of either.   It is not the case that when God took on our human nature in the womb of the Blessed Virgin Mary that he suddenly overwhelmed it and eradicated it.  No, He took on our human nature and remained both God and man, thus making it possible for us to become like Him!  He became man so that we could be deified.

This is the very mystery that Christ is referring to this morning in the Gospel of St. John when He says:

Whoever loves me will keep my word, and my Father will love him, and we will come to him and make our dwelling with him.
—John 14:23

It is not merely that the thoughts of God will dwell in us; God’s sentiments alone do not dwell in us; we do not simply have god-like habits that dwell in us.  GOD dwells in us!  In Baptism the Holy Spirit begins to live in us and we are divinized.  The God who so loved the world that He became man, now in the Sacraments of the Church, deifies us.  This, in a preeminent way, is the essential gift that the priest brings to the world.

In his book, From Death to Life: The Christian Journey, Cardinal Shönborn refers to one of the works of St. Gregory of Nazianzus on the ministry of the Sacred Priesthood, and mentions how the “exaltedness of his new task makes the one who is about to become a priest shudder.”  Shönborn goes on to offer the quote from Nazianzus that would later be incorporated into the Catechism of the Catholic Church’s description of the effects of the priesthood.  That quote reads:

We must begin by purifying ourselves before purifying others; we must be instructed to be able to instruct, become light to illuminate, draw close to God to bring him close to others, be sanctified to sanctify, lead by the hand and counsel prudently. I know whose ministers we are, where we find ourselves and to where we strive. I know God's greatness and man's weakness, but also his potential. [Who then is the priest? He is] the defender of truth, who stands with angels, gives glory with archangels, causes sacrifices to rise to the altar on high, shares Christ's priesthood, refashions creation, restores it in God's image, recreates it for the world on high and, even greater, is divinized and divinizes.

There is something that the Catholic priest is called to do that no other human being on earth is called to do.  There is something that the world needs more than anything else on earth, or in heaven, and that the Catholic priest brings to this earth in a preeminent way.  The world needs God.  Desperately.  Human nature cries out to God for divinization.  The priest, himself divinized and sanctified for the sanctification of the world, brings God into the world by virtue of his sacred priesthood.  The priest brings the body and the blood of Christ into the world, onto the altar and into the bodies and the souls of the faithful.  The priest brings the sacramental absolution, the forgiveness of sins in the Sacrament of Reconciliation, freeing men and women from sin and death and restoring God’s divine life to those who long to receive it.  The priest anoints with oil the sick and the dying, preparing them in that unction to be united to God for all eternity.

There are literally thousands of faithful souls who fill our churches every weekend who have never heard this remarkable mystery explained to them.  There are thousands of homilies preached week after week that never come close to this essential and mystical reality that is both miraculous and basic to the life of every Baptized Christian.

In this Easter Season, in particular as men preparing to be ordained to the Sacred Priesthood of Jesus Christ, I would suggest that we spend time each day meditating on this remarkable gift, this “wonderful exchange” that comes to us in the person of Jesus Christ.  The priest is called to be deified, and to be then the instrument of God in bringing souls into this awesome reality, truly becoming the one who deifies those whom he is called to serve as he helps lead them to union with Christ in the Sacraments and in the teachings of our faith.  May we truly embrace this call and become that priest that “shares Christ's priesthood, refashions creation, restores it in God's image, recreates it for the world on high and, even greater, is divinized and divinizes.”
Posted by Rev. Christopher M. Mahar at 1:30 PM