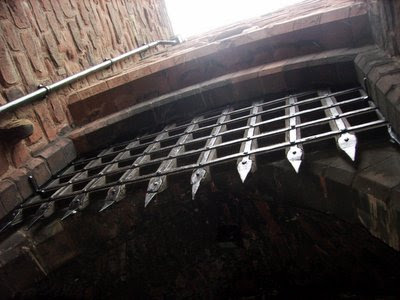 (Twenty First Sunday in Ordinary Time-Year A; This homily was given on 21 August, 2011 at Blessed Sacrament Church in Providence, R.I.; See Matthew 16:13-20)


There are many treasures and gifts that we share as Catholics in the world today. Whether or not we were baptized into the Church as infants or have been received into the Church as adults there are so many truths of our Catholic faith that are simply priceless. One of our greatest treasures, in fact, is “on display” right now in Spain in the City of Madrid. Our Holy Father, Pope Benedict XVI, is a true gift to the Church and to the world.

This very weekend there are 1.5 million young people from all over the world that have travelled great distances to be with Pope Benedict XVI. It is said sometimes that young people are no longer interested in coming to the Church. Tell that to Pope Benedict XVI! Tell that to the 1.5 million people gathered in prayer in Madrid. The Pope truly is a treasure for us as Catholics and a gift to the world we live in.

The Eucharist is another priceless gift we thank God for as Catholics. We gather together each week to receive Jesus Christ, body and blood, soul and divinity. The Eucharist is the greatest treasure we could ever possess or, rather, the great Treasure that possesses us, takes hold of us and transforms our lives in ways beyond our ability to fathom.

It can also happen that people in our lives will question and challenge the very things that we hold as sacred. Even relatives and friends at times will take issue with those truths of our faith that we value most of all: the personal dignity of every human life from conception until natural death, the sanctity of marriage as a covenant of love between one man and one woman, the real presence of Christ in the Eucharist.

Defending our faith can seem, at times, to be a daunting task. Many Catholics may feel like they just do not know as much as they would like to when it comes to responding to these questions and challenges that come sometimes from all directions.

Thankfully Christ has given us such tremendous promises and the blessed assurance that we will never be alone. He says to us at the conclusion of St. Matthew’s Gospel:

Behold, I am with you always, until the end of the age.

One of the greatest promises Christ makes to His Church that relates directly to St. Peter and his successor Pope Benedict XVI, as well as to the power of God in the midst of the Church, is the one we hear in the Gospel this weekend. Peter acknowledges that Jesus is the Christ, the Messiah, the Anointed One of God. Jesus immediately recognizes Peter’s insight as a gift:

Blessed are you, Simon son of Jonah. For flesh and blood has not revealed this to you, but my heavenly Father.

This is no ordinary event nor is St. Peter simply more intuitive than the other disciples. He has received the revelation of God and responded to it. Christ continues:

And so I say to you, you are Peter, and upon this rock I will build my church, and the gates of the netherworld shall not prevail against it.

This rock-solid promise of the presence, power and permanence of Christ and the primacy of Peter is a tremendous gift and treasure for us as Catholics. Down through the centuries the Church has always held onto these words of our Lord as a reminder of the hope we have in Him. No matter how dark things get or how difficult the battle with evil becomes, the Church will still stand firm. We will continue to proclaim Jesus Christ and His Gospel message until the end of time.

Yet that hope to which we cling, however real it may be, is not precisely what Christ is saying in this passage. Certainly Christ will sustain us through all the trials and tribulations we face. Nonetheless, our Lord’s words to us are not merely defensive; they imply much more than that. It is not simply the case that the Church will be protected by Christ and sustained in the assault of the powers of evil and darkness. No, what Christ is saying is that the gates of the netherworld will not be able to sustain the assault of His Church! He says that “On this rock I will build my church,” and, taking the literal Greek:

The fortified city gates of the netherworld (the powers of death and evil) will not be able to triumph in an encounter with it.

Far from remaining on the defensive, the Church is called upon to go forward in the power of the risen Christ and do no less than lay siege to the gates of the netherworld!

I would suggest this weekend that there are three ways we are called to do that as Christians; three ways of living out our Catholic faith in such as way that we stage an offensive against the powers of darkness and the powers of evil in this world.

The first and perhaps least considered is prayer. There is unthinkable power in that daily converse we have with our God in prayer. Are there people in your life that are isolated from God and from the Church? Are there people that you know and love that feel all alone in this world and live a life separated from God and perhaps have lost their faith?

Hell is eternal separation from God. Many people find themselves in a living hell and long for the communion of life and love that you and I take for granted every day. Pray for them! When we pray for those around us it is not a merely passive plea. We are breaking into the realm of darkness and taking hold of souls created by God; we are lifting them up to God, bringing them into His light, and pleading for their salvation. There is nothing passive about that! It is an all-out, full frontal attack on the gates of the netherworld. And it works. God listens to our prayers.

The second way that we are called to lay siege to the gates of the netherworld is through a full sacramental life in the Church. When a new child of God is brought into the life of the Church, the priest prays in the Rite of Baptism:

The Christian community welcomes you with great joy. In its name I claim you for Christ our Savior by the sign of his cross.

The Sacraments, initiated by Christ and embraced in the life of the faithful, have the power to draw souls from the netherworld into the Kingdom of God.

The same is true for each one of us, already baptized. When we are struggling with sin and even if we have become lost through choices which have separated us from the life of grace and the life of God, we can be brought back into sanctifying grace once more through the Sacrament of Reconciliation. With reconciliation and the power of Sacramental Absolution, the words of the priest announcing the forgiveness of Christ—“I absolve you from your sins…”—have the power to reclaim souls once again for the Kingdom of God.

Finally, and perhaps most challenging for some, the work of evangelization is a powerful offensive weapon against the powers of darkness that oppose us. To simply share our faith and the love we have received from God with those around us who perhaps do not believe in Him can change lives and transform the world we live in. The proclamation of the Gospel message transformed the world in the days following the resurrection of Christ. It transforms the world still.

How is God challenging us to live out our faith this week like never before? With faith and trust in God we ask for the grace to pray for those we love and who are perhaps isolated or separated from God and His Church; to live a full sacramental life in the Church, especially united to Christ in the weekly celebration of the Eucharist; and to proclaim and share our faith in confidence with those around us. When we do so we carry with us the promise of Christ Himself, that not even the gates of the netherworld will be able to stand against us.

Christ in the Midst of the Storm